by, Kyrié Carpenter, Managing EditorTweetShare25ShareEmail25 SharesJust outside of Ithaca, New York in a newly constructed warehouse. Sandwiched between a local solar company and a Lime Bike depot is another innovative and earth-friendly neighbor. The very first Minka factory rolled open it’s doors earlier this month.Zach Thomas, Director of Manufacturing and master builder Jeremy Andrews have been working tirelessly (and boisterously) on getting the shop ready to create Minka parts. The idea for Minka began at the start of the ChangingAging Tour. Since that time Dr. Thomas and his team have visited over 175 communities, spent countless hours on design, testing, and have generated millions of lines of proprietary code. All of this has brought us to today; the day when the machines turn on and we start creating Minka parts. Minka homes are pre-fabricated using robotic CNC machines, and then shipped and assembled on site in less than a week – with almost no waste.The Minka building system is a distinctive approach to home design, fabrication, and assembly that is faster, simpler, and less wasteful than conventional construction methods. When asked about how working at Minka compares to his work in the US CoastGuard Zach reports that his time serving prepared him well. The common thread he sees between that experience and Minka isAttention to detail toward a broad-reaching, positive goal…all while trying to streamline and find the most efficient ways to do things. 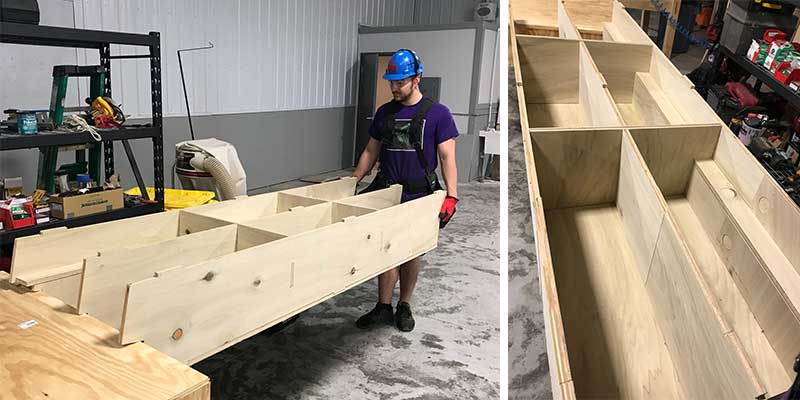 Minka blends centuries-old Japanese joinery with state of the art robotic manufacturing tools. The result is a flexible, adaptable building system with components that can be combined and recombined to create any number of possible floor plans. Even better, this approach slashes waste and reduces the energy use. Zach thinks that what enables Minka to be so different is the company culture, “No idea is too crazy, no idea is stupid… Everyone is encouraged to explore the direction they want to go and we have the tools get them there. All of us work together to reach our goals. Everyone deeply cares about each other as individuals and the bigger picture.”You may have noticed Zach shares a last name with our founder Dr. Bill Thomas. He is in fact his eldest son. After years of collaborating with his wife Jude, beginning with the Eden Alternative, learning from his daughters Haleigh and Hannah, and working with his son Virgil on the early permutations of the tour, another Thomas has joined the family business (innovating to improve quality of life for people of all ages and abilities). This summer Thomas’ youngest son Caleb will also be helping out in the factory. When asked what it is like to work with family Zach replied,I never had any intention to work for or with my dad. It’s the dream I never knew I wanted…The shop is up and running. If you have been thinking about building a Minka of your own now is the time to let us know. Our production schedule is filling up fast – be sure to get YOUR Minka on the schedule!Related PostsMinka the AirBnBNestled into the shore of Lake Cayuga in Upstate New York sits the very first Minka. The Minka prototype was created for Haleigh Jane Thomas. Haleigh is now graciously sharing her Minka through Airbnb. Any Tribes of Eden fans out there? This is your chance to be hosted by the…MinkaI have done my level best to reform nursing homes through the “Eden Alternative.” I have tried to re-invent nursing homes with the “Green House” model. But up until now I felt I had still failed to answer the simplest and most important question: “What do people really want?”Minka MAGIC Homes and CommunitiesNationally renowned aging expert Dr. Bill Thomas unveiled today the first-of-its-kind robotic prefabricated Minka house built on the University of Southern Indiana (USI) campus in less than a week featuring universal design accessibility and advanced manufacturing technology.TweetShare25ShareEmail25 Shares